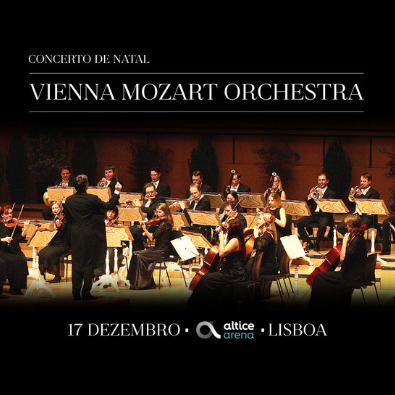 This Christmas, the prestigious Viennese orchestra performs in Portugal a concert dedicated to Mozart.

The Viennese Mozart Orchestra is composed by 30 musicians and was founded in 1986. Since then, it holds an important and secure place in all musical programmes in the city of Vienna, performing on average more than 160 concerts annually, in the most beautiful concert halls of the capital city of Austria, such as the Golden Hall of the Musikverein, Brahms Hall and Vienna State Opera; but also in major and well- reputed halls all over Europe.

Apart from the regular programme of concerts in its home town, the Vienna Mozart Orchestra has also conquered an intense activity in performances worldwide too. The orchestra has performed many times in Japan and, in 1991 had the honour to play for the Mozart Year in Tokyo. The orchestra also represented Austria at the International Festival “Cervantino” in Mexico in 2002. The Vienna Mozart Orchestra has already been present in Italy, Spain, Germany, Poland, Hungary, Greece, Malta, Turkey, Ukraine, Belorussia, Latvia, Lithuania, Russia, Morocco, Kuwait, United Arab Emirates, Qatar, Bahrain, Singapore, Taiwan, Korea, Japan, Brazil, Panamá, Guatemala, Mexico, Canada and in the Unites States.

This Christmas performs in Portugal. The concert is scheduled on December 17th at 21h30, in Altice Arena.